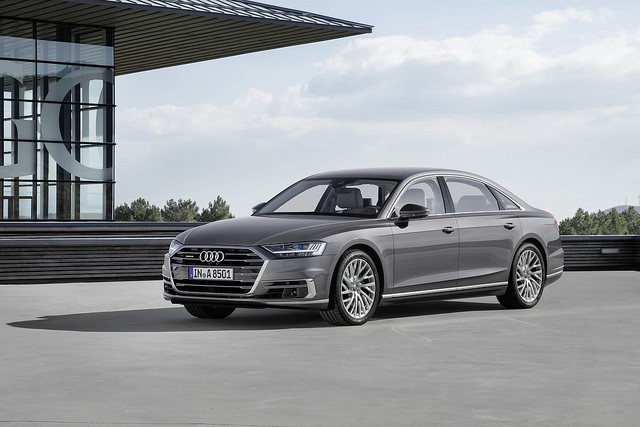 The new Audi A8 is literally stuffed with the most progressive technologies. For example, the model is equipped with different electronic driver assistants working with 24 ultrasound and radar sensors. Also, A8 features video cameras and even laser sensors. So, the new generation of the flagship luxury sedan is provided with 40 assistance systems. Of course, this is not all. In the new Audi A8 there are many other interesting innovative technologies. Here are the most interesting and cool functions…

The 48-volt electrical system is among the best features of the new Audi A8. In comparison with the classic 12-volt power supply, the 48-volt system allows some car systems to be more energy efficient.

For example, the new A8 is equipped with a 48-volt rechargeable battery that receives a charge from the power-generating system during braking.

By the way, the car’s engine doesn’t always start with a single starter. If necessary, the motor can be started with the use of a powerful 48-volt generator, which additionally assists the starter, when a powerful launching is needed (for example, in severe frost).

The 48-volt electrical system of Audi A8 also provides a number of additional functions that require more electrical energy. For example, the 48-volt system provides power to the active suspension of the sedan, which received the name ‘AI Active’. 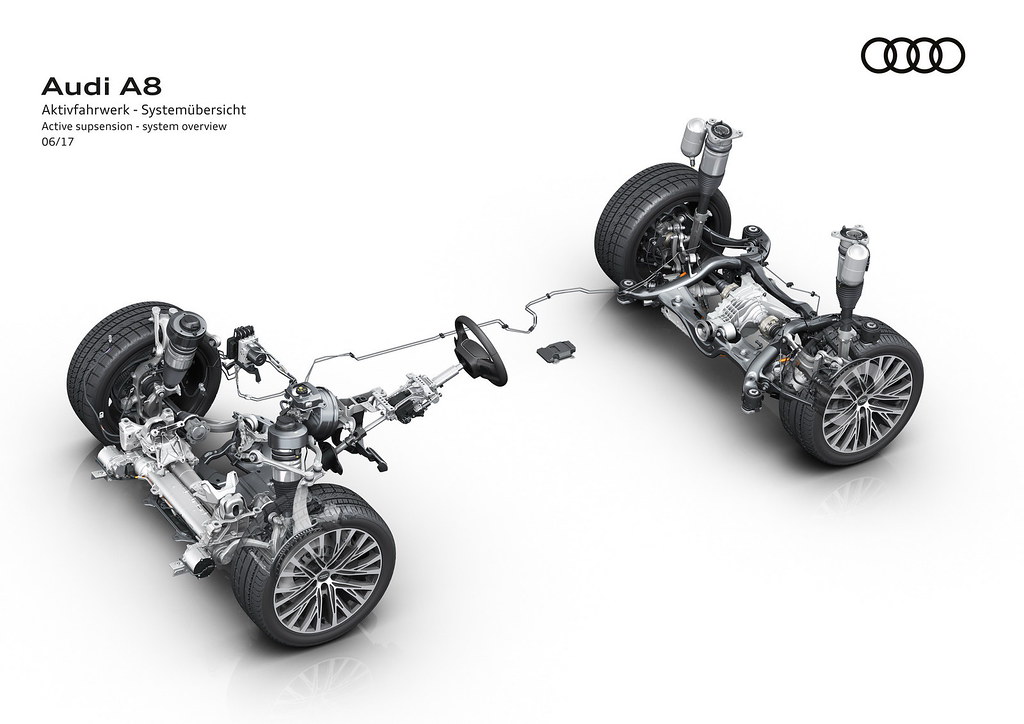 With this type of suspension, the standard air suspension is supplemented by an electric chassis. So, on each car rack engineers installed electric motors, which can either raise or lower the car body depending on the driver’s requests or the traffic situation. For example, when the road becomes bumpy, the car can automatically increase the ground clearance.

So, the electric motors can constantly adjust the work of the suspension in order to absorb shock when driving on bumpy road. The speed of making changes to the work of shock absorbers during the movement of the car is 15 just milliseconds.

The new A8 uses a progressive adaptive steering, which controls all four wheels. So, in addition to the front wheels, the rear wheel axle can also turn, providing the sedan with greater maneuverability, especially at low speed.

Thanks to this system, the car becomes more manageable and stable, which is very important when you need to change traffic lane quickly. Also, this system perfectly helps with maneuver associated with evading obstacles on the road.

In a hurry, many drivers forget to look in the left side rear view mirror before opening the door to get out of the car. This is dangerous not only for the driver, but also for passing motorcyclists and cyclists who can be knocked down by the opened car door. 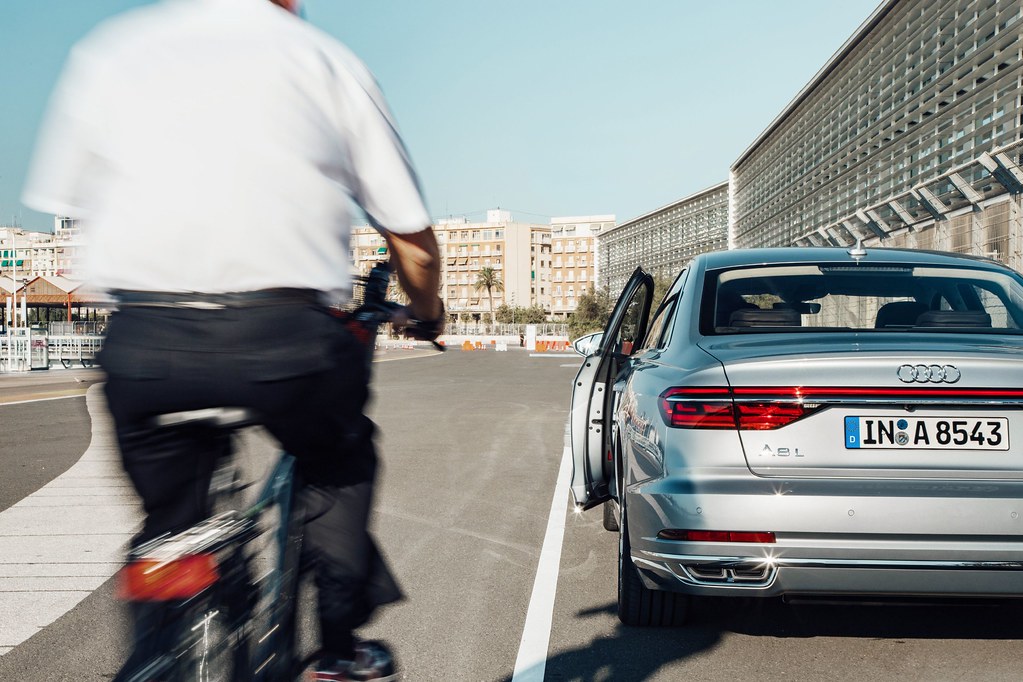 The new Audi A8 has an interesting safety system that warns the driver of the danger when he pulls his hand to the handle of the door. The system warns the driver if another car, motorcycle or bicyclist is located on the side of the car.

In addition, if a car or any other vehicle moves along the side of the car, the electronics not only warns the driver of the danger by light signals, but also block the door lock for a second if the driver decides to open the door without noticing a warning about the danger.

Audi A8 is equipped with the latest cross traffic assistance system, which can warn the driver of danger both visually and acoustically. If necessary, the system can apply a short braking. The assistance system is active when driving at speeds up to 30 km/h. 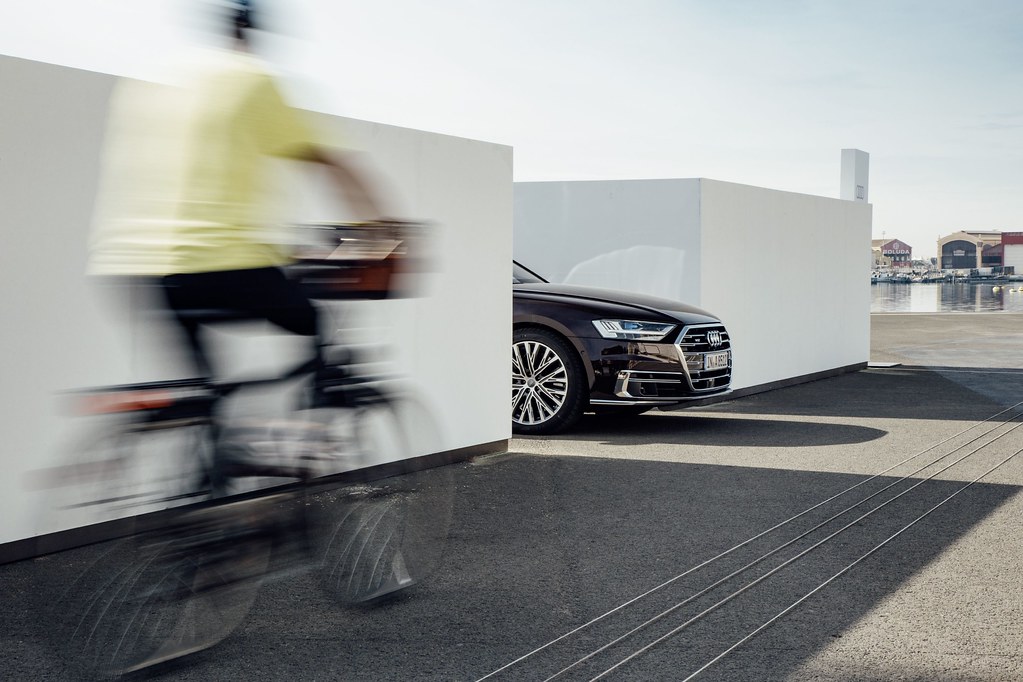 Cross traffic assistance system uses medium-range radars and a laser front scanner. For example, if the driver wants to go to the intersection where there is poor visibility of the adjacent roads, then by activating the system, he will be able to see the information from various radar sensors. If cars and other vehicles outside the driver’s field of vision are detected, information about them will be displayed on the screen of the infotainment system.

A8 of the new generation is equipped with matrix LED headlights. This allows the driver to constantly use the high beam headlights, effectively lighting the road without the risk of blinding the oncoming drivers. For example, in city conditions, the headlights automatically go into the low beam mode, due to switching off several LEDs in the matrix optics. 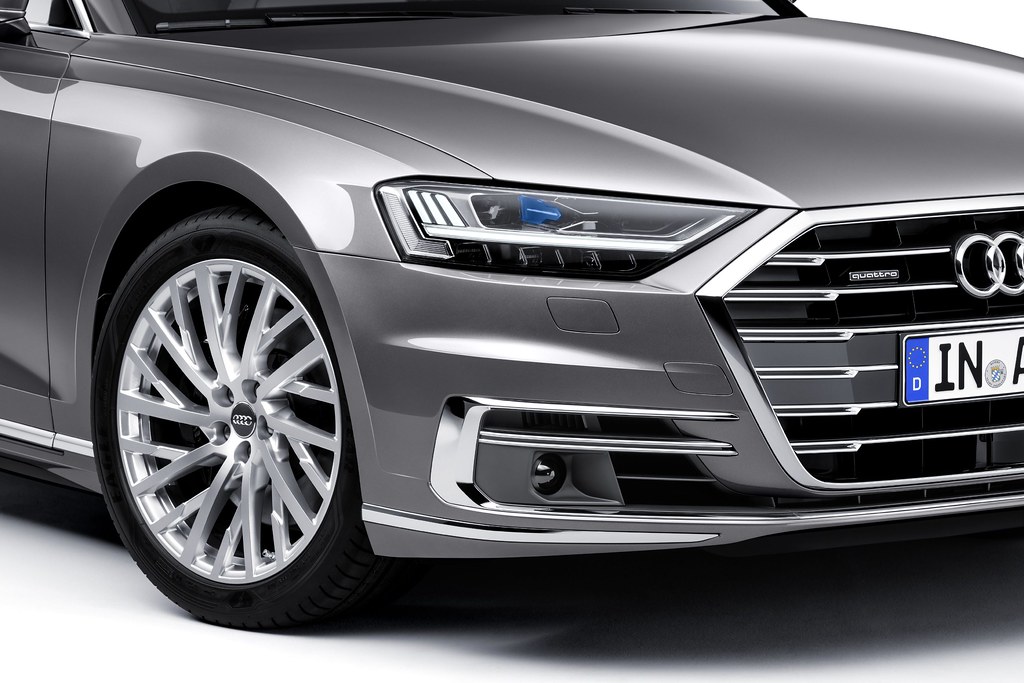 As soon as you start moving on the highway, the LED optics automatically switches on the high beam option again.

In addition, matrix LED headlights of Audi A8 are controlled by the navigation system. For example, if you have set a certain route in the car’s navigator, the car will automatically turn on the turn signals before the turns. Also, the adaptive headlights help the driver by shifting the beam of light as soon as the turn or bend of the road begins.

So, the headlights with GPS work a bit in advance, which provides better efficiency when lighting the road.

Summing it up, Audi A8 is an ultra-modern car with a huge selection of advance technologies onboard. All the car’s systems aim to make A8 comfortable, easy-manageable and safe. In case you want to try this amazing automotive masterpiece, use Global rent a car in Germany  offering an extensive selection of Audi cars. 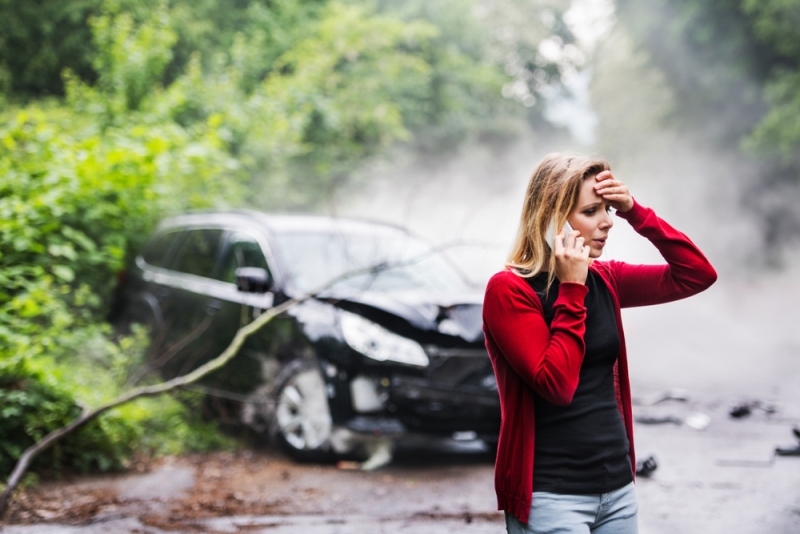 All You Need to Know About Personal Injury Law